Head Guide Jono, and senior guide Brett, along with their Bukela Game Lodge guests, were fortunate this week to witness a very unusual lion hunt.

Jono breaks down the sighting:

"While watching two lionesses relax in the overcast morning conditions, one lioness took interest in a small burrow nearby. The burrow was not visible to us, so when she sat up and began stalking a few steps forward, myself and Brett could not see what it was she was interested in and certainly did not assume the burrow was right in front of her.

After a mere step or two, she dived headfirst into the burrow and, with a few digging actions, she raised her head with what we assumed was a young warthog. It always happens so quickly. Strangely, she pulled an odd face and dropped it. By now, the other lioness had seen this and made her way over, she had a smell, pulled the same face and they both walked off to rest. Wondering why they had not eaten it (these ladies love their warthogs!), I zoomed in and looked at the sequence of photos I took and was surprised to notice it was, in fact, an Aardwolf pup and not a warthog.

A really interesting sighting. She clearly felt the vibrations or movement of the Aardwolf and might have assumed it was a warthog, too. You never know until you sink your teeth in... By the look on their faces, this would be cauliflower for kids!"

The Aardwolf is a rare nocturnal creature who is a member of the hyena family but is an insectivorous mammal. https://en.wikipedia.org/wiki/Aardwolf

This was a first for both guides as well as our guests. One never knows what sightings Africa will dish up for you... 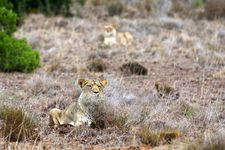 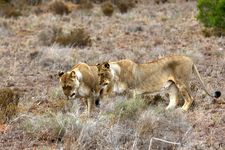 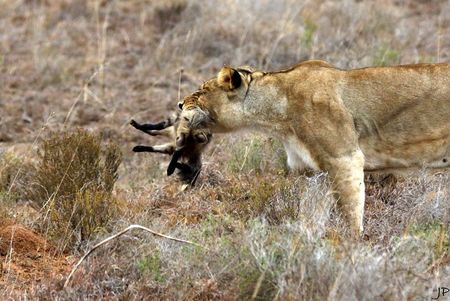